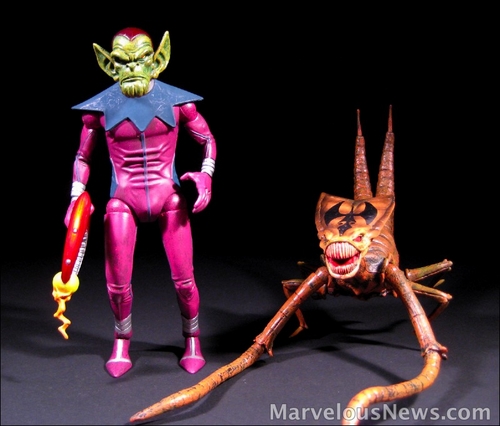 Brood: With their home, the Broodworld, destroyed, The Brood travel the universe in search of the strongest, most powerful entities to serve as hosts for their spawn. An alien, insectoid, warrior race, the Brood must implant eggs into other living beings until they hatch and fully consume their host, gaining any powers and abilities the host possessed. Because their society depends on the survival of the fittest, the Brood will continue to stop at nothing in their quest for complete domination and perfect procreation of their kind.

Skrull: For millions of years, the extraterrestrial Skrulls roamed the galaxy in search of worlds to conquer. Using their shape-shifting ability, the Skrulls dominated planet after planet and built an interstellar empire. After entering the Milky Way Galaxy, the Skrulls encountered the Kree empire and the resulting war has lasted to this day. Amidst all of this, the Skrulls' primary objective is the domination of Earth itself. And where the Skrulls cannot succeed by force, they have tried to achieve through infiltration of Earth's governments and organizations. To date, every attempt has been thwarted by Earth's heroes and protectors.


This site uses cookies for site configuration, advertising, and analysis. By using this site you accept our policies - Read Full Site Policy OK

Entertainment News International (ENI) is the #1 popular culture network for adult fans all around the world.
Get the scoop on all the popular comics, games, movies, toys, and more every day!

©Entertainment News International - All images, trademarks, logos, video, brands and images used on this website are registered trademarks of their respective companies and owners. All Rights Reserved. Data has been shared for news reporting purposes only. All content sourced by fans, online websites, and or other fan community sources. Entertainment News International is not responsible for reporting errors, inaccuracies, omissions, and or other liablities related to news shared here. We do our best to keep tabs on infringements. If some of your content was shared by accident. Contact us about any infringements right away - CLICK HERE